MICHAL:
I don’t know if it is because we are from a country without sea, but the idea of crossing to different islands has always appealed to me. When we started to plan our journey there was always one island standing up while I looked on the map, the Isle of Man. In false confidence I wanted to paddle there but Natalie was clear from the beginning, we were not even to talk about it, every time I have mentioned it. So it was a big surprise when she said that she was thinking about it while we were making our progress through Cardigan Bay.
We were not too hopeful, we knew we needed perfect conditions and they were five days too early. We did not expect the good weather to last but just in case, we tried to get to Anglesey as soon as possible. It always looked like we were one day too late so we went for Menai Strait as not to waste time doing the whole Anglesey and knew that we would have an opportunity to make up our minds once in Beaumaris.
The morning we woke up at Gallows Point next to Beaumaris was one of the hardest in decision making so far. Should we go right or left? We had almost perfect forecast. Almost, as there were no wind, no waves for two days but fog, which nearly made us to turn right towards Liverpool. We could see hundred and fifty metres at most and it was not going to get better any time soon.
We pondered through maps, charts and various forecasts all morning considering our options. In the end I have decided that fog is going to lift and we went for Bull Bay.
Once we have arrived there and could see limited camping options, basically no spare place for tent, it was obvious it would be pub diner and pitching tent after dark. We went to Bull Bay Hotel, which was just next to the wall on which we were drying our stuff, and had huge sign of welcoming non residents.
This time we changed our routine, the restaurant looked very empty, and asked if they were serving food that night, and then followed with our normal question if they had WiFi. We were given bizarre answer that WiFi was just for residents as they have all business accounts on it. Even plugs we could only use if eating, which they mentioned about three times. We politely left and went to search for something else. At Trescastell Hotel they had the right approach and pointed us to a table with most plugs and provided password for connection.

Once on line we found email with invitation from Marcus Demouth, but sadly him being in the next bay and us not wanting to go in kayaks again, we stayed in our illegally pitched tent. We were calmer, now, having a backup plan of where to crash if not going.
I have to admit that for the first time I felt little bit nervous all night, being worried about my calculations and forecasted fog patches and fog banks. Fortunately early morning sunshine cleared all worries and we set of towards Isle of Man shortly after six.

As for crossing there is nothing much to write about, we paddled and paddled and occasionally stopped to pee, wee, drink, have a snack, take jackets off, watch water, one porpoise, some birds, a big boat and one yacht, a motor boat and two fishing boats, and then there was Port St Mary.

NATALIE:
Some time before we started the trip and Michal had the rare occasions when he was thinking about planning, he there and now mentioned the crossings. I didn’t want to hear about them, we were not to talk about it. And so we didn’t, even when we set of on the journey. I did not feel confident, strong and mentally ready to undertake such challenge. But as we slowly set off and with each bay we crossed and the longer we sat in the boats, I began to give them a thought.
I started to think about Lundy crossing once we left from Cadwith before the Lizzard. Still the second part of it, the Bristol Channel crossing, wasn’t to be mentioned. But even that slowly changed and by Newquay we started to talk about them. You have read about both.
The Isle of Man crossing was still off bound. No way. Well, till Cardigan Bay, then it changed and I started to feel a bit confident that we may give it a go. The last crossing of Cardigan Bay was slow and tiring and a little preview of sitting in a boat with no end, but I felt ready. I only told Michal about it when we left Aberystwyth. I was even getting nervous that we would not be able to do it, as each day of good weather far away from Anglesey I despaired, that we won’t make it there on time.
The paddle through Menai Strait was great and I am glad we gave ourselves the time to make decision. The morning at Gallows Point was difficult, sea state and wind great, fog not so. Looking at OS maps showing mud and sand were putting me of North west coast of England, on the other hand it is part of the coast line. But also I like islands and Isle of Man and wanted to go there. Left, right, left, right. But really it was Michal’s decision as he would have to plan it and make sure we get there, if we dare. Well you know by now which decision was made and yes we are at IOM. 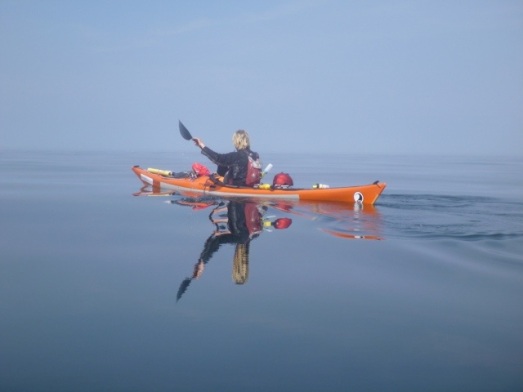 We were lucky to have great conditions, it was long crossing, 15 hours. I found it fairly entertaining, but it’s all about the state of mind. There are few things I was thinking about during it.

My journey to Isle of Man really started in London. When we left I wasn’t fit paddling too long or too far (I haven’t paddle for months before departure), but slowly the stamina and endurance built up. This is what we want to show to young people at Shadwell Basin Centre, it doesn’t matter where and how you start, but if you persevere you would achieve. And the sense of achievement is great, we all know about that.
The second thing which was on my mind during crossing was how similar it was to Joshua’s life. It took many paddle strokes to get from land to land, again and again and again. We couldn’t see land for hours and after the first glimpse we knew we still had hours to go. But we got there eventually. And so it is for Josh, for him to learn and achieve it would take many tries and great many repetitions. Both Josh and all people around him will give enormous effort and show great patience but they will see progress in the end. Josh is clever boy, that’s clear already, and would be able to learn great lot in order to make the most of his abilities.
So if you read this far and appreciate the big effort that is behind above mentioned achievements, please, show us all support and go to our donate page and spare few coins. In the end it all will come together and make our target. Thank you.