Ever since we left London, I was going to Scotland. It seemed so far away and a long journey, then suddenly we are here !. The arrival was more sudden then what I would have liked. There was a feeling of satisfaction, we made it so far, and a little feeling of, yeah, we achieved, we are almost at our half point. This all made it hard to get motivated again. Why should we paddle any more and why so hard and where to? Yes, we know where we going, back to London, but this  seems to be a very distant target.
Fortunately, during this time of low spirits we received an email, it was from Cathy and Stuart, from Sea kayaking Oban. They were inviting us to stay with them on Easdale Island. The new purpose for the  following days paddling was given, and as always, once we had the idea where we were going, we wanted to be there as soon as possible.
Easdale Island is north of Jura Sound, where tides move very fast as they have to squeeze in narrow gaps around Luing Island. Of course, if you need them, they have their own time table. From our pooh campsite it was about 80 km and with only six hours of tide in our favour, we knew it was going to take us more than one day.

But the morning in the pooh campsite with the wind blowing against us and the troops of white horses on the water, it was clear, that we were going for a cake instead. However, wind eased a bit in the afternoon and we could get ready to leave at six. We played Martin Lee king and pushed against the tide and still noticeable wind till nine, when tide turned. 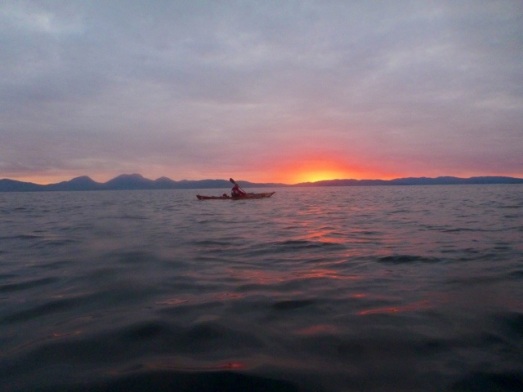 It turned into a calm evening paddle with a beautiful sunset over Jura. At eleven, when it got darker, we decided to look for a campsite.
We found a secluded beach somewhere around Point of Knap, and on it was a tent with someone who turned out to be a great snorer. But still we felt sorry for him, since he had to walk for miles to get to such place and still had the party gate crashed.

One important thing, the MIGDES have officially found us. And having spent one morning packing with their help convinced us that that night we are going to sleep in a house!
We left shortly before the tide turned in our favour and whizzed through the sounds worried, that by Luing the tide would turn against us and we will never make it to Easdale. Beautiful, everything around was beautiful, that we are missing the words to describe it.

However there are many words to say about Coryvrecan Sound. This is between Jura and Scarba, we had no intention of going anywhere near it, but still we could feel the pull from it. And to make it more eventful, the sun suddenly disappeared behind the  clouds and the wind picked up. After passing an island opposite Coryvrecan Sound many confused streams and eddy lines were playing with our boats. And when we stopped paddling we could hear the roar of the sea. In the end we passed the entrance all right, and more than being in actual danger, it was the reputation of the place which played with my imagination.

Now with the time running tight we pushed harder and soon were north of Luing. The tide was fast but we could not keep our boats straight as again many eddy lines and confused streams were playing with them. So we enjoyed skidding like cars on ice seeing that we were going more or less where we wanted to, towards Easdale. 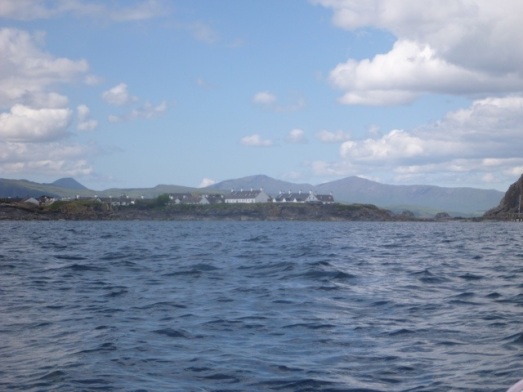 And once we passed the lighthouse on Fladda we relaxed knowing that we would make it there, and took time to admire the landscape around. 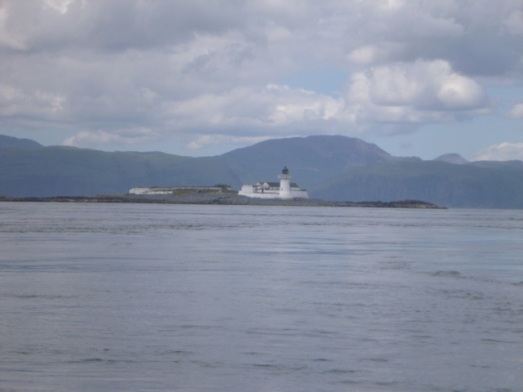 We came earlier than expected, so we made ourselves at home waiting for Cathy and Stuart to return from work.

We went to explore the island. It was a thriving slate quarry in 19th century.

And slate is lying everywhere around here.

The island is very picturesque with restored former workers cottages. Some of them are holiday cottages but there are still about 50 adults and 20 children living here permanently. 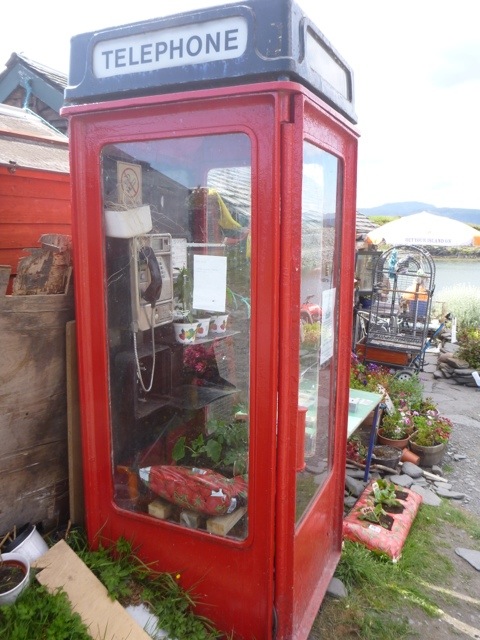