“A bothy is a basic shelter, usually left unlocked and available for anyone to use free of charge.”

We heard about them, but as their location not usually publicised we didn’t know where to look for them. We just hoped that on our way around Scotland, we will come across at least one.
Thanks to Johnny and Bruce we discovered two. The first one we visited yesterday morning,where we not only met with B & J again, but also with Alison from seakayaking Plockton and two of her clients.

Actually we met Alison earlier that morning while camping on a beach close to her house. She was very sorry she missed us last night and couldn’t invite us to stay in her house. But we are always happy to come next time.

B & J shared the location of the next bothy and we parted our ways only to be reunited at Applecross Inn. We aimed much further than the bothy place, but yet again, our companion North Easterly made us to adjust the goal. 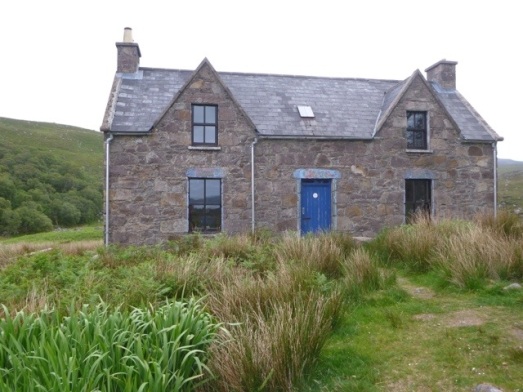 And so we had first experience of a bothy. Great!

Today we set off with another ambitious plan, and felt sorry we wouldn’t be able to stay at Rhuba Reidh Lighthouse, about which we found on Joe’s blog, as we were to pass it around lunchtime.

We listened to forecast at 1pm which predicted NE F4 to 5 for the next 2 days, we had F3, so thought nothing of it. The forecast was right, soon the wind picked up and the sea changed to predicted moderate.
We were passing incredible cliffs and headlands with lost of caves, arches and other formations. Unfortunately we could not go closer or enjoy it longer as the wind was getting stronger and waves bigger, close to solid F6.

We have climbed over many moving hills when the lighthouse came into view. We attempted to pass it to reach the slipway, but the waves were getting even bigger and sharper and hitting directly the north side of the headland where the slipway is. We didn’t like at all and decided to turn back and land on yet another big boulders beach on lest exposed west side of the lighthouse. We coming back with such a huge following sea was very exciting but fortunately uneventful.

The boulders were so huge that it needed some quick thinking action. I saw people watching us paddling, so went up to the lighthouse to look for help. After politely answering the question about where our car was ( sorry, Garry) two guys came to give us a hand. They were brilliant and the boats were on shore in no time. They saved us at least an hour of struggle and emotions. Thank you Garry and Alex. 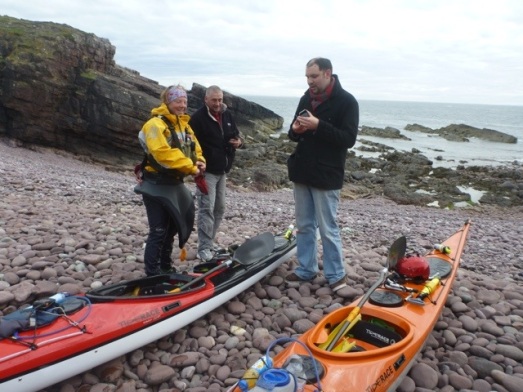