Some time ago someone told me this, referring to the day on which we started our journey. I didn’t quite see it that way, however slowly this sentence has started to play on my mind.
It all may have started at home, when our tent arrived for the second time with wrong poles. We are resourceful, and as it was four days before departure, we repaired them ourselves, thinking nothing of it.
Yet events of our journey are painting another picture.
The first problem was caused by one of our new camping mats, it lasted two nights. Fortunately our friend Alastair stepped in and agreed to bring us his. He did so on that dreadful day when we landed on Winchelsea Beach. I still remember that day as the worst one of our trip so far. On the same day our wheels broke, too. We managed to secure new ones in Brighton.

The second sleeping mat followed soon. This one lasted all the way to Hurst Castle. Thanks to Kerri and Andy and Anna who bought new one for us and met us in Bournemouth, that was sorted, too.
Another big disaster was my dry suit. First time it gave up on Chesil Beach. Fortunately we were storm bound in Burton Bradstock and at O’Three in Portland they repaired it before we left. Only for me to discover loose stitches and a hole on right knee patch. I then had to wait all the way to Harlyn Bay in Cornwall to get new drysuit which was sent to Barbara and Ian. The same time Michal got his, repaired. His dry suit seal gave up before Portscatho.

I have this great paddle, it’s carbon, it’s light, it’s comfy. Only the joint in the middle gave up when we were fighting big waves and headwind between Freshwater East and Barafundle Bay. Michal fixed it there and then by duck tape. We refixied it later. Amazing what an orange duck tape can do. The paddle has been good as new ever since, only can’t be splitted anymore. I was really upset about it, but only till Michal’s paddle did the same, three weeks later. You may notice the pretty orange tape on our photos.
Some time passed with no disasters, relief, I thought, we broke the spell. At Rhuba Reid my phone died, so no nautical charts for us. Fortunately just few days ago we managed to get the new Navionic version on the iPad.

We passed the next big corner at north west only to find out that Michal’s VHF is out of order for good. Mine followed soon, lasted till the hairy moment in the middle of Moray Firth and our unfinished crossing to Lossiemouth. I foolishly decided to listen to weather forecast only to realise that there won’t be any anymore. Big thank you to Fiona, who coincidently contacted us and offered to run errands without knowing what she was in for. She brought them to us yesterday.
My boat needed only a minor repair, so nothing worth to mention. But our set of luck really highlighted the day before yesterday.
We landed late, took a little while to find tent place in Gardentown, settled in the tent cooking dinner only to be interrupted by three coastguards. I am really sorry that our friend Kerri got the scary call from US telling her that our spot was sending distress call. Indeed, it was flashing SOS like mad. We only managed to silence it by pulling the batteries out. Guess we won’t use it again. The coastguards were happy they didn’t have to look for us in the middle of the sea. We then had to go all the way up the hill to search for phone signal in order to find out who else from our friends and relatives was in distress. We should not have bothered, no one. Yet again, thanks to Fiona, who got a distress call from us, we may have a new spot, soon. 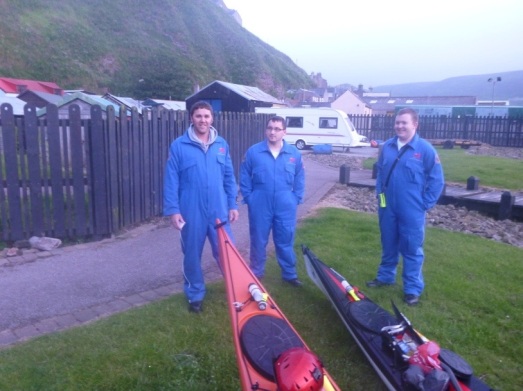 As for the tent, it can’t be used when it’s really windy, it leaks as soon as few raindrops start and two of its poles are already broken. But it’s still standing.
Were we fools to have left on Fool’s day or to have left at all?