They have just started the crossing from Amlwch in Wales to the Isle of Man, around 80 km an estimated 14 hours paddling. Please donate 10 p per km or £ 1 per hour to cheer them up on this very demanding crossing. To follow their progress click on ” our position ” button or follow the link below

Yesterday we paddled to Menai Strait. We have never padded there before, and we’re looking forward to it.
It didn’t disappoint, although the water in the strait wasn’t moving as fast as we expected, but maybe our expectations were tool high. I have just few pictures of the entry, a town and Britania Bridge. 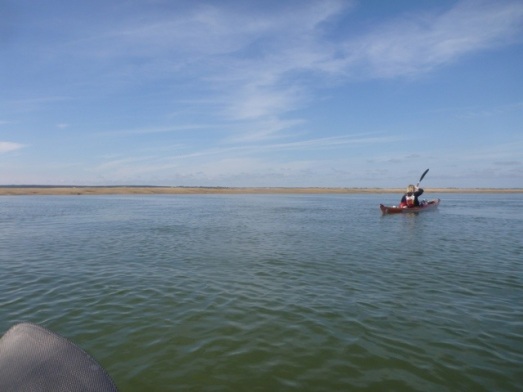 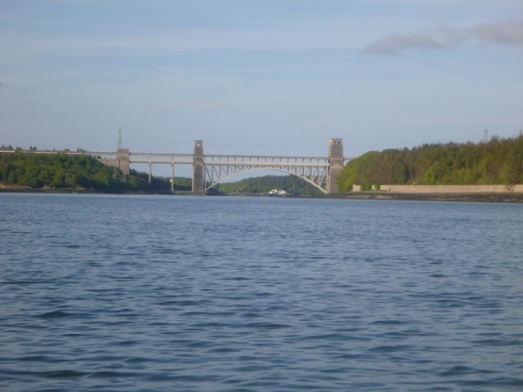 This morning we woke up in our tent on Gallows Point and it was foggy.

Visibility 150m, we had to hug the coast and found a nook in a rock with lots of painted stones. Barbara and Ian would like this. 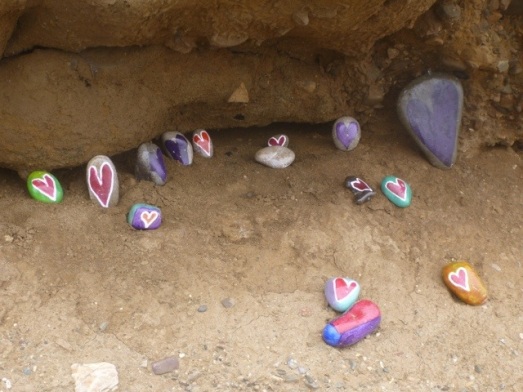 On the map Cardigan Bay didn’t look that big. At one point Michal was toying with the idea of crossing it from Strumble Head. But the enormity of the firing range and the distance, about 45NM, changed his mind. We liked our time at Steve’s, even more when he came to New Quay the following morning with his friends to help us to get the boats to the water.

And so we went on and on. What made it so long for us was the fact that it all had just one name, Cardigan Bay. The last crossing didn’t help either, it looked fairly small on the map, it was just a corner of a bay, but it was long, slow and tiring.

On the other hand we had some great glimpses of the wild life. 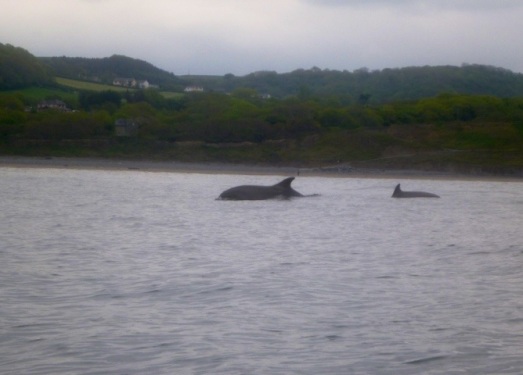 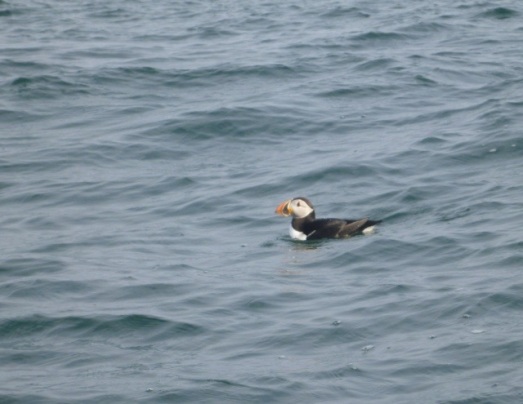 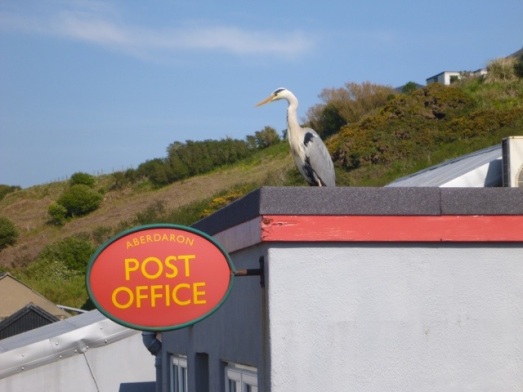 And food wasn’t bad either, good we have to go to public houses to check their WiFi. 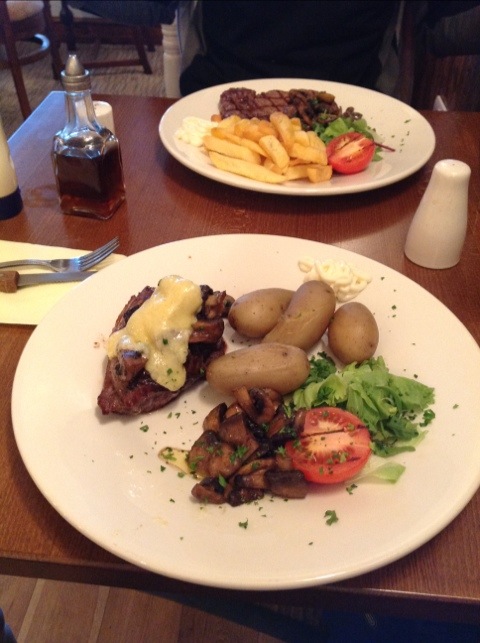 Today we were slow to start, not till two hours before the end of the morning tide. This put us in front of a decision, paddle through Brandsey Sound and then struggle against the tide as far as we were able to. Or stay somewhere close to the headland and catch the early morning one tomorrow. We choose the second option, as we are not Martin king.
This gave Michal the opportunity to shorten his beard and hair, so he can see and be seen again! 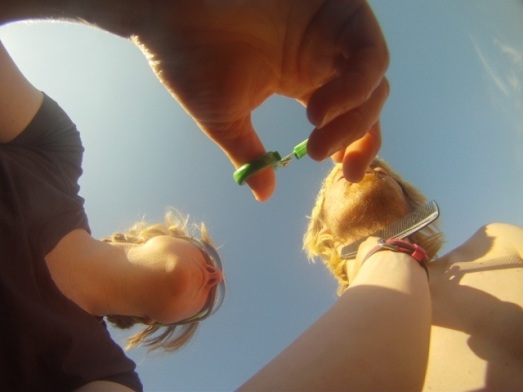 And I could indulge in some basic domestic chores.

We had great time at Steve’s, the armchairs were comfy, but there is always time when the good things have to finish. Steve went to work and yes,we would feel a bit guilty if he founds sitting still there, so paddling we went.
The forecast was for F4 to 6, headwind of course and moderate sea. We had not expectations and therefore it wasn’t too bad in the end. Besides the back up plan was straight forward, we knew where Steve lives.
We paddled all right, although Michal had three cold splashes and kept complaining about it.
Enjoy the video. We did feel a bit sick while watching it.

The evening before our departure day we received two emails. One was from Sue from West Wales and one from Steve B. from Aberporth. Both were offering us places to stay with all the luxuries that come with being under a roof and both gave us good information. Unfortunately we had to decline the offer from Sue but decided to take Steve on his and so mission Aberporth started. 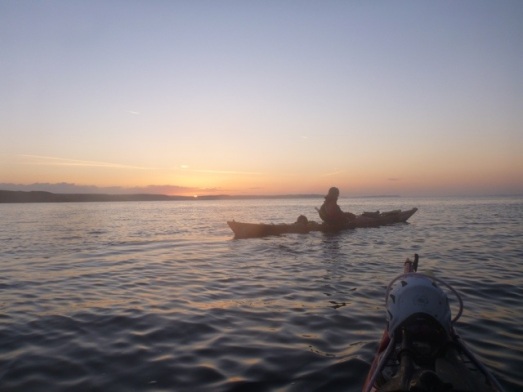 Having a firing range ahead of us we had no other option than to leave Barafundle Bay early. We left at 5.30am, it was about 15 kilometres through the range and we had three hours.

We enjoyed the breaking of the day and the some of the most beautiful coast. We allowed ourselves a little exploration of a cave, but really we were in a bit of hurry.

All was going wonderfully and just when we thought we were out of the firing range, a patrol boat came. Apparently the firing range is larger than we thought, but they were nice and offered to give us a lift or tow. Tempting, especially that the tide started to turn. But no, we have to do by our own power, so we politely declined and continued under escort.

We pushed agains the tide towards Jack’s Sound and camped on a beach waiting for the next tide. The midday sun was warm and we both snoozed for about an hour waking just in time to pull boats higher up on the beach.
The paddle to Ramsey Sound was uneventful but we saw lots of puffins in proximity to Skomer island. Some blurred picture here. 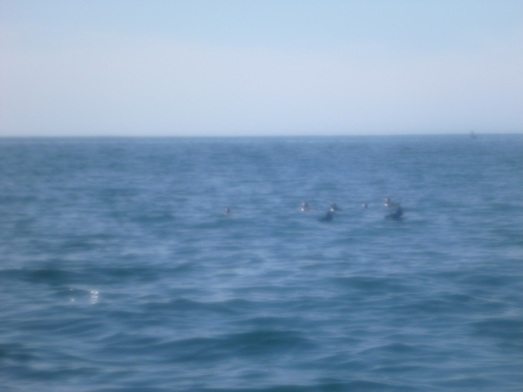 It was getting late once we passed Ramsey Sound and we started to play with the idea of calling it a day at Whitesands Bay, but the tide was going, we were comfortably sitting in it, so decided to go as far as Aberdeidi. Also it’s much quieter than Whitesands Bay. A reward for this decision came in the look of several dolphins swimming around us all the way there. No pictures of them though. 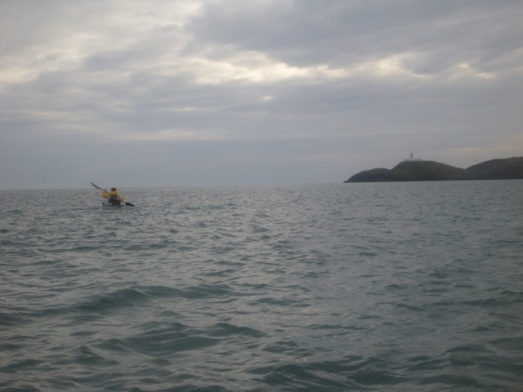 Second morning we got up early again a found out that if we are very close to water and have only already made tea and lots of sweets, we can be ready in one and half hour! We were catching another tide past Strumble Head. However once we passed it the ride finished and a slog against tide started. We pushed till Godwick for late breakfast, rest and wait for the next conveyor belt along the long Cardigan Bay.

We made it to Aberporth late in the evening since some headwind came to keep us company for a while, never mind at least we saw more dolphins. They are hard to capture when you paddle but when we landed in Aberporth there was one wooden one, so I got that one at least.

Being beaten by the wind yet again we became land bound on Barafundle Beach for few days.

Failing to make it through firing range on Sunday meant that on Monday we could not go, even if it looked that the wind decreased to F5, which we can do for short distances.

In the end it was exactly as we were assured by few friends, not bad place at all. The beach is lovely and quiet. The cliffs are stunning even from the land.

We discovered some Lilly ponds, few local establishments and so far no one seemed to mind.

Hopefully tomorrow early morning the combination of wind, tide direction, non firing will allow us to make a move.

The farmer, his name is Andrew, was true to his word and came in the morning with his daughter, Saffron, and brought us coffee. We had a chat and the he took us to local shop. He was also offering showers. But just having left Lundy campsite we didn’t want to become spoilt. He also offered teas and charging stuff but we politely declined all. Then he mentioned wi fi and got our attention. We then spent the rest of the morning in his kitchen.
Saffron draw a cool picture for us, which is bellow.

Then it was time when the tide turned in our direction and time for us to go paddling again. Unfortunately the wind beat us yet again. It was solid F6 against which we stood no chance. The target of our today’s journey got shorter and shorter till we ended in Barafundle Bay, whole 2,5nm from Freshwater East. Hopefully when we reach Scotland we will be able to fight more and longer.

Our stay at Lundy was longer than planned but pleasant nevertheless. After the first beautiful day of the first rest day we had the pleasure to listen to fog horn for two days. It was also windy and rained a lot. On the other hand Lundy’s library shelves were well stocked and both of us had an opportunity to read two books while we were there. 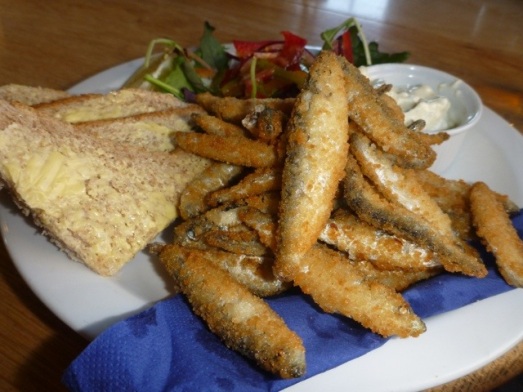 On our fourth day we had the opportunity to witness and learn about bird watching. Not that we learnt any more names and species of birds. But we witnessed what a rigorous sport it is. It is important to note every spotted bird in special book, and to add your personal details and of course details about the bird. All in pencil! And then it gets competitive how many of such birds were already spotted, who was first, who saw most and so on. Maybe when we finish with kayaking we would become bird watchers. 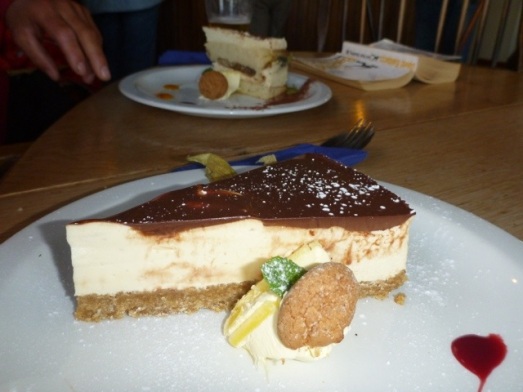 Four days we stayed at Lundy, had very good food, good rest but the time to move on came. We got up early and left just after six. Everything was very quiet while we followed the coast of the island and only the seals came to sing good bye. This bliss lasted only a short while, once past the shelter of the island the sea became moderate and wind increased. But hoping the forecast was right we carried on. Fortunately it all calmed down lately. The crossing picked up its pace and soon we could see land all around us, Lundy at south west, North Devon at south east, Gower Peninsula at north east and our destination at north. We only couldn’t see any land at our west as America is little bit too far. 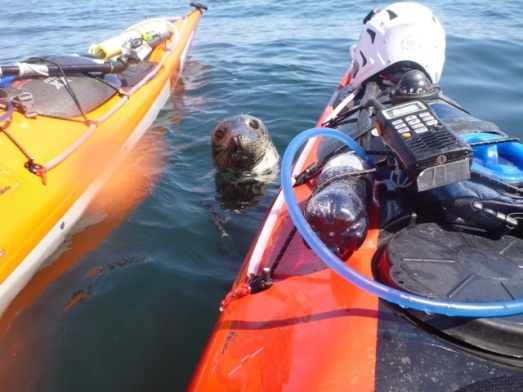 Just when the crossing started to be little bit too routine a seal appeared. He looked a bit breathy as if chasing us from Lundy. He must have been tired as he tried to climb up on our kayaks. Fortunately he preferred orange colour to red, but tried to get on both boats in turns. For a while it was fun, till we realised that it was very determinate seal and if we wanted to stay upright we better kept moving, since he couldn’t get on a boat in motion. 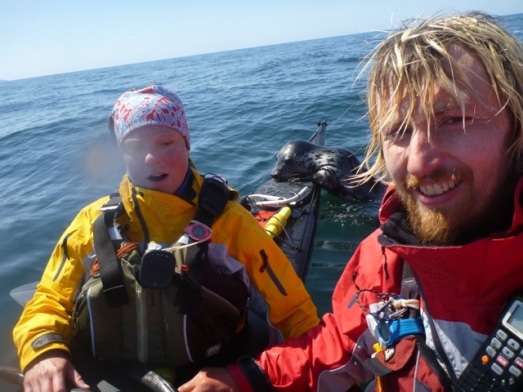 But seals obviously learn quickly, he disappeared for a bit and we thought we got away, but the second time he joined us, he was not afraid to get on board and catch a ride while the vessel was moving. And so water taxis we became. 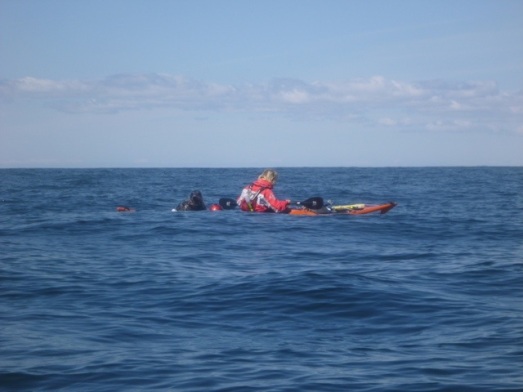 In the end we were saved by the wind and the change in a sea state back to moderate and the seal was gone. The rest of the journey went smoothly without any major events.
We landed in Freshwater East and met local farmer Andrew, who may take us to the shop in the morning, since we have later start and he offered to help.